Fair Districts PA provides timely updates to keep supporters and the press up to date. To find out what the press is reporting check out our “Media Highlights page”.

Abusing our State Constitution to Grab Power Must Stop.

There are two PA House bills to amend the state constitution — which means there is no gubernatorial veto — that may come up for votes within the next week. These amendments would seriously damage our state’s democracy.

Fair Districts PA announces support for the proposed maps of Governor Wolf and Draw The Lines. Today the Senate State Government Committee meets to vote on a Congressional Map.

One commission, two committees and a Governor’s Advisory Council all arranged for public testimony and took public comment. Our volunteers watched every hearing, transcribed oral testimony, and read available submitted written testimony, collating it into a central source.

Call Your Representative: Vote NO on Judicial Gerrymandering (HB 38)

HB 38 threatens to undermine the independence of the Judicial Branch of our Commonwealth. This bill will effectively give legislative leaders the opportunity to gerrymander our courts. 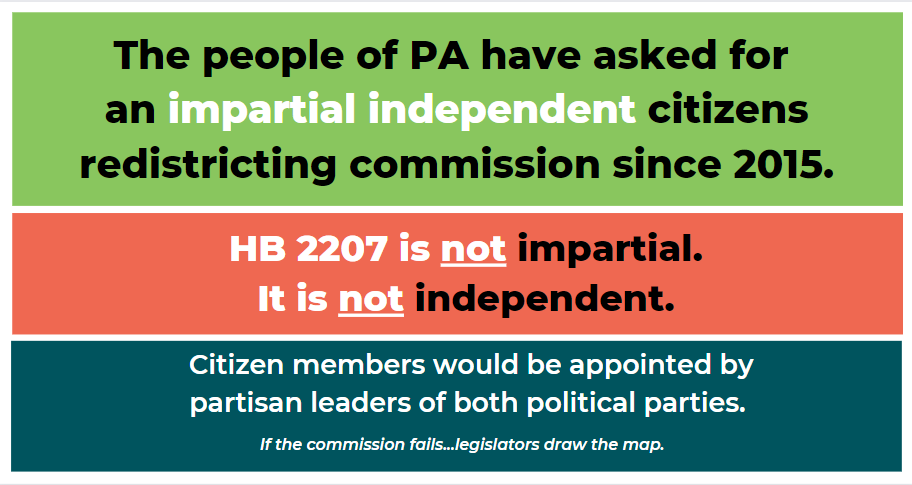 Call your Representative: Vote NO on HB 2207

Fair Districts PA sent the following letter to members of the House State Government Committee in response to HB 2207 introduced on January 4 and scheduled for a vote on January 10.

On December 8, Representative Seth Grove, Chair of the House State Government Committee, announced a preliminary Congressional plan. The map was created by Amanda Holt, litigant in a successful appeal in the 2011-2012 redistricting cycle.

The People’s Maps Submitted to the LRC

Fair Districts PA supporters and allies believe that electoral districts belong to all of us, and that all of us should have a say in how districts are drawn.